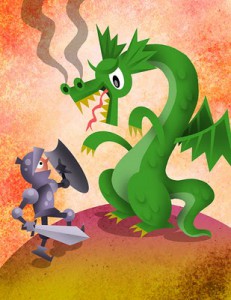 This Easter, many of Australia’s church leaders abandoned their traditional Easter messages to issue dire warnings about the imminent onslaught of the heathen hoards.  Last month’s Global Atheist Convention attracted 2,500 people and a  torrent of publicity and it is clear that atheism is a dragon these holier-than-thou heroes are eager to slay.

Ironically, Australia’s atheist dragon was happily asleep in its cave until the persistent political posturing of religious institutions poked and prodded it into a fiery response.  In effect, Australia’s clergy are oiling up their rusty armour and mounting their sway-backed nags to battle a monster of their own creation.

It seems that that while Cardinal Pell, Archbishop Jensen, Bishop Fisher, Reverend Moyes and theologian, Scott Stephens are ardent supporters of freedom of religion, they’re not so big on freedom from religion.  For years now, Australian churches have been quietly insinuating their way into our political and educational institutions.  The now (presumably defunct) Lyons Forum became an influential conservative Christian faction within the Howard Government.  Meanwhile, Prime Minister Howard and Deputy PM Costello happily kowtowed to the prejudices of the religious right in return for the bloc votes of the mega-churches.  The new Liberal Party leader, Tony Abbott has boasted publicly that the eight Catholics in the Howard cabinet were influential in stemming the tide of secular humanism through that Government’s decisions to overturn the Northern Territory’s euthanasia law, ban gay marriage, stop the ACT heroin trial and try to reduce abortion numbers through [Christian] pregnancy support counselling.  For Abbott, the [Catholic driven] DLP is alive and well and living inside the Liberal/National Coalition.

The Christian agenda is transparent.  The Australian Christian Lobby openly admits their mission is to ensure that Christian principles and ethics influence the way Australians are governed.  Similarly, the National Alliance of Christian Leaders argue that Christian moral values and ideals must become the prevailing standard of the culture.  The Family First Party, heavily weighted with Pentecostals, wields its influence in the Australian Senate and the Legislative Councils of New South Wales and South Australia.  Even the Exclusive Brethren cult has privileged access to our parliamentarians through accredited lobbyists – thanks, in part, to the sponsorship of Reverend Moyes.

The insidious reach of the religious right seems even to have penetrated the Australian Labor Party – once the bastion of Australian secularism.  Despite Rudd branding the Exclusive Brethren a dangerous cult, his government has ploughed millions of tax-payers dollars into funding schools which isolate the children of the cultists from the wider community.  More millions have gone into expanding Howard’s ill-conceived school chaplaincy scheme which installs largely unqualified evangelists into a state school system

which is, supposedly, secular.  While Prime Minister Rudd happily attended the Australian Christian Lobby’s conference in November, he failed even to respond to invitations to attend the Global Atheist Convention in March – does the ALP now represent only Christian Australians?

Economically, Australians buckle under high state, federal and local property taxes as they carry the burden for the billions of dollars not paid by churches.  The Catholic Church, for example, earns more than $15 billion dollars a year in revenue from various profit-making ventures but pays not a skerrick of tax.  It owns more than $100 billion worth of property but pays no rates.  The ordinary punters, ‘working families’ as the Prime Minister is so fond of saying, pick up the slack.  We are not just talking about exemptions for charities here – the Catholic Church has a vast financial empire including private schools, aged-care homes and hostels, hospitals, superannuation funds, insurance companies, a multi-storey carpark and a vineyard.  Profits from these enterprises are not taxed and there is no requirement for the church to show how the profits are disbursed.  Similarly, Hillsong Church rakes in over $40 million a year – untaxed.  How much of that goes to actual charitable causes and how much goes towards proselytizing and Pastor Brian Houston’s property holdings on Bondi Beach?  No-one knows.

Less than 7.5% of Australians attend Church on a regular basis (Zuckerman, 2005).  Probably close to 50% or more have no real interest in religion beyond claiming a nominal affiliation with the church into which they were baptized on the quinquennial census form.  And yet, we forego billions of tax dollars to support institutions which are intent on infiltrating our political and education systems and imposing their particular religious values on to the rest of us – whether we like it or not.

And what are these ‘Christian values’ religious lobbyists wish to promote?  At least 80% of Australians believe the terminally ill should be free to choose a medically assisted death while the Catholic Church prides itself on having vetoed that right through its political influence.  Jim Wallace from the Australian Christian Lobby would like to see women stripped of their reproductive rights by outlawing abortion.  Tony Abbott argues that Jesus would have turned away boat people.  Churches consistently seek exemptions from anti-discrimination laws, so that they may continue to discriminate against their fellow Australians on the basis of their gender, sexual orientation, religion or marital status.  Polls consistently show that Australians are vehemently opposed to compulsory internet filtering while, under the influence of the Australian Christian Lobby, the Labor Party stubbornly persists with a policy which has earned international condemnation.

But it is we atheists who are now accused of being ‘morally bankrupt’.  Yes, we godless infidels who argue for freedom of speech, freedom from religion as well as freedom of religion, equality – regardless of gender, sexual orientation or religious affiliation (or lack thereof), the right of children to grow up without religious indoctrination and the right of women and the terminally ill to have dominion over their own bodies – we are accused of having no values.

We have seen the long-term damage caused to America’s political, legal and education systems by a politicized religious right: a supreme court stacked with conservative Christian judges; an evangelical President who defied the UN to take his (and our) nation to war based on his conviction that ‘Gog and Magog’ were at work in the Middle East; court cases over the teaching of creationism in public schools; and a population increasingly riven by sectarian differences.  Is that what we want for Australia?

Australia’s religious institutions have pushed their luck too far.  They have taken advantage of Australians’ political apathy to push their agendas and their values on to a largely secular public while relying on us to fund the assault on our freedoms through billions of dollars in tax exemptions!  They have poked and prodded and intruded upon our supposedly secular government and education systems, assuming that the apathetic atheist dragon would merely raise one sleepy eyelid and return to its rest.

They were wrong.  They have pushed us too far.  Secular and non-religious Australians are beginning to speak out and fight back and, for that, we are accused of being ‘morally bankrupt’, communistic, and akin to Nazis.  These outrageous insults are the last refuge of those who can see their empires crumbling around them.  Australian atheism and secularism is growing apace because the churches have overstepped the mark.  Public opinion is rising against the churches.  The dragon they have awoken will not be defeated by the ineffectual huffing and puffing of the clergy.  A fire has been started, and it is spreading fast.  The dragon is awake and the churches have only themselves to blame.